On November 16, 2018, The Bank of Jamaica announced it decision to hold the policy interst rate unchanged at 2.00%.

According to the Bank,  “This decision reflects the Bank’s assessment that inflation will approach the upper end of the 4.0 per cent to 6.0 per cent target by June 2019 and will trend thereafter to the middle of the target range. Bank of Jamaica also judges that current monetary conditions are consistent with inflation returning to the centre of the target of 4.0% to 6.0% over the medium term.” 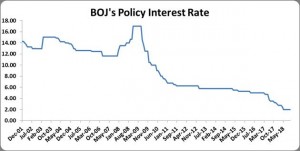 The Bank’s short-term outlook pin points key sources of upward price pressure  linked to on-going improvements in domestic demand and increases in utility rates. on the other side, sources of downward pressure inculde a slowdown in the pace of price increases for agricultural produce. The Bank’s medium-term outlook for inflation of 5.0 per cent incorporates expectations for a gradual acceleration in economic activity (growth in real GDP), buoyed by further strengthening of the US economy and continued domestic monetary accommodation.

The table below illustrates the Bank’s schedule and decisions regarding the Policy Interest Rate year to date.

Note: Effective 1 July 2017, the Bank of Jamaica policy rate is the interest rate paid on overnight deposits held by deposit‐taking institutions (“DTIs”) at Bank of Jamaica