The Bank of Jamaica (BOJ) released its short-term inflation analysis and forecasts on September 04, 2017.  The latest data released showed an inflation rate for July 2017 of 0.6% which was driven mainly by movements in the Food and Non-Alcoholic Beverages division which recorded a 1.2% increase respectively.  The Statistical Institute of Jamaica (STATIN) reported that the prolonged effect of the flood rains in mid-May continued to impact agricultural products.  It caused an upward movement in the class ‘Vegetable and Starchy Foods.’  Additionally, the 0.3% increase in the ‘Transport’ division also contributed to the inflation rate for the month which was attributable to an upward movement in the cost for air travel.  In July 2016, an inflation rate of 0.5% was recorded. The BOJ further noted that the average inflation rate for the month of July for the last five years was 0.6%.

The Bank highlighted three factors underpinning the revised forecast which are trends in demand, supply and import prices. According to the Bank’s analysis, “the main indicators of domestic demand monitored by the Bank were mixed for the review period. The real value of imports is estimated to have decelerated by 0.4% for the three months to July 2017.”  Regarding supply, “for July 2017, RADA’s forecast had suggested that the supply of most starches and vegetables were increasing relative to the previous month. This would imply the reduction in some food prices. However, the Bank’s forecast indicated an acceleration in the rate of price increases as informed by market price surveys.” Surveys carried out by the Ministry of Agriculture & Fisheries (MOA) and CAC indicated a deceleration in the rate of increase in agricultural prices in August 2017 relative to July 2017.

The BOJ noted that with regards to import prices, “in August 2017 crude oil prices rose by 3.0 per cent to an average of US$48.06 per bbl. Price increases mainly stemmed from reports that the Organization of the Petroleum Exporting Countries had reduced exports to the United States. Upward price pressures also emanated from the market’s reaction to US government data which revealed that demand for motor fuel rose for the week ended 28 July 2017.”

These factors have led to the Bank forecasting August’s inflation to reflect higher prices for ‘Food and Non-Alcoholic Beverages’ driven by impact of May 2017 flood rains on food prices and transport due to higher petrol prices. The Bank added in its analysis that, “upward pressure is expected to be partly offset by Housing, Water, Electricity, Gas & Other Fuels due to a decline in electricity rates.”

Inflation in September is forecasted by the BOJ to mainly reflect increases in ‘Food and Non-Alcoholic Beverages’, ‘Education’ and ‘Housing, Water, Electricity, Gas & Other Fuels’, due to “increases in non-processed food prices, seasonal demand stemming from back to school preparations and higher electricity rates, respectively.” The Bank stated, “inflation in October is expected to primarily reflect increases in HWEG and FNB due to higher petrol and non-processed food prices.” Inflation for the fiscal year 2017/18 is forecasted to fall within the BOJ’s target range of 4% – 6%. 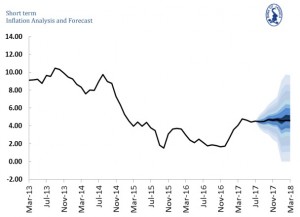