BPOW highlighted, “We had shipped substantial quantities of soap to the United States in the first quarter in order to meet the demand from new customers such as Walmart but the retail sales through these accounts were not sufficient enough yet to justify the same level of reorders for the second quarter as the warehouses of our distributors had adequate stocks. In our main market in the CARICOM region, we were faced with intense competition which resulted in a lower level of export sales.”

Other income, for the period totalled $13.49 million a significant increase when compared to the $5.93 million recorded for the same period last year. 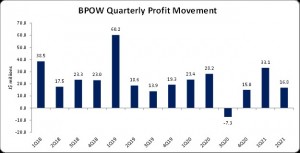