Caribbean Assurance Brokers (CABROKERS), for the three months ended March 31, 2022, reported revenue of $90.60 million compared to the $75.08 million booked for the corresponding period in the prior year, reflecting a 21% increase. According to CAB increase in revenue is due to, “the International Insurance Division which saw increased new business activities; the individual Life Division which saw an increase of 33%. Other income also saw an increase of $2.1 million or 17%.”

Total operating expenses closed at $101.46 million for the three months ended March 31, 2022, representing an increase of 9% on the $93.29 million recorded in the prior year. Of this, Administrative expenses amounted to $65.66 million, 4% higher when compared to the $63.30 million in the same quarter of 2021. Selling expenses recorded an increase of 19% for the three months, totalling $35.81 million (2021: $29.99 million). The Company explained that the increase in operating expenses is due to increased, “in professional fees, audit fees, repairs and maintenance as well as staff related costs as we boost human resources capabilities to prepare for continued growth in demand.”

Operating income, therefore, amounted to $3.52 million for the three months ended March 31, 2022 relative to an operating loss of $5.95 million the prior comparable quarter.

CABROKERS noted, “Our focus for the remainder of the year is to complete the implementation of our system that will see improved customer services delivery.” 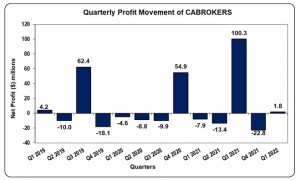