Caribbean Assurance Brokers (CABROKERS), for the three months ended March 31, 2021, reported revenue of $75.08 million compared to the $70.10 million booked for the corresponding period in the prior year, a 7% decrease. CABROKERS noted that this increase, “ was attributed to increase in our International Division $3.7M, Employee Benefit Division $1.2M and General Insurance Division $2.2M; however, the Individual Life Division declined by $2.2M.”

Other operating income totalled $12.26 million (2020: $12.42 million) for the three months ended March 31, 2021. As such, total operating income amounted to $87.34 million (2020: $82.51 million) for the twelve months ended March 31, 2021. According to management, this increase is as a result of, “three out of our four divisions had growth in commission while one division had a decline in commission over the previous quarter.”

Total operating expenses totalled $93.29 million for the three months ended March 31, 2021, representing an increase of 10% on the $84.88 million recorded in the prior year. Of this, Administrative expenses amounted to $63.30 million, 13% higher when compared to the $55.85 million in the same quarter of 2020. Selling expenses recorded an increase of 3% for the three months, totalling $29.99 million (2020: $29.02 million). The Company explained that the increase in operating expenses is due to, “ the strategic decision to increase our revenue generating capacity, this is starting to bear fruits as we have seen year over year growth in three of four business lines.”

Operating loss, therefore, amounted to $5.95 million for the three months ended March 31, 2021 relative to an operating loss of $2.36 million the prior comparable quarter. 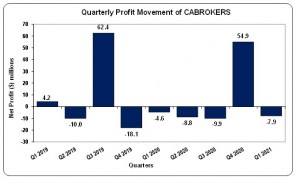