The Company had a 1% increase in Total Expenses for the quarter closing at $69.16 million compared to $69.56 million in 2016. For the six months ended April 2017 there was a15% increase in Total Expenses to $146.87 million (2016: $127.94 million). This was as a result of an 34% upward movement in Selling & Distribution Expenses to $18.71 million (2016: $13.94 million) as well as a 12% increase in General Administration to $128.16 million (2016: $114 million). The increase in Selling & Distribution Expenses “arose from increased commissions (paid on sales realized),advertising and warranty and guarantees” while the increase in General Administration Expenses “arose from salary related payments (performance incentives and new hires), consultancy services for risk review, coaching and implementing new Human Resource and Customer Relationship Management systems.”

There was a $2 million increase in in Other Income to $2.12 million from $119,000 reported for the same period the prior year due to tax credits booked. Consequently, once Other Income and Total Expenses are considered, Profit before Taxation and Finance Cost grew by 8% to $58.57 million (2016: $54.15 million).

Net Finance Costs has increased significantly for the period in review to $7.15 million (2016: $3.81 million). This was as a result of reduction in cash by lawsuit payout and also a reduction in interest income.

“We are on track to achieve our major goals for the year, i.e. to continue growing sales and profits, build back cash reserves, settle lawsuit interest payments, complete Risk Assessment study by PricewaterhouseCoopers, and to implement our new cloud based customer relationship management system. 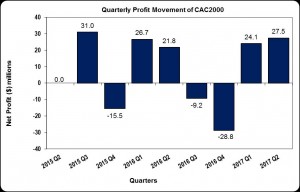