Management stated that, “we have seen a ramping up of revenues in our last quarter and we started our new financial year with over $870M of contracts in hand.”

Other Income of $47.21 million was recorded for the period up from $19.03 million reported for the same period the prior year. The Company noted that, “this was due to the impact of the Barbuda project.”

Loss Before Taxation for the year-end to closed at $26.51 million versus profit before taxation of $74.77 million in the prior comparable period. No taxes were recorded for the period. Net loss for the year-end amounted to $26.51 million compared to net profit of $74.77 million booked in the same period last year.  Net Profit for the quarter was reported at $12.96 million compared to $2.28 million for the corresponding quarter of 2018. 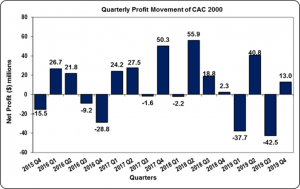