The Company noted, “Expenses were kept lower than the previous year as we took rapid action to respond to covid-19 by reducing operating costs but without making any of our staff members redundant.”

Other Income of $2.54 million was recorded for the period significantly down from $47.21 million reported for the same period the prior year.

Profit Before Taxation for the year-end to closed at $32.54 million versus a loss before taxation of $33.40 million in the prior comparable period. No taxes were recorded for the period. Net profit and comprehensive income for the year-end amounted to $32.54 million compared to net loss of $33.40 million booked in the same period last year.  Net Profit for the quarter was reported at $25.29 million compared to $6.07 million for the corresponding quarter of 2019. 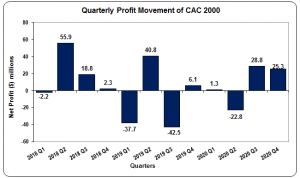