The Company reported a 30% increase in total expenses to $111.79 million (2018: $86.25 million). This was due to a 37% increase in general administration to $106.98 million (2018: $77.98 million), which was partially offset by a 42% decline in selling and distribution to total $4.81 million (2018: $8.27 million). Management stated, “as a result of budgeted increases in professional fees (Barbuda design teams and purchasing services) and salaries and non-budgeted increases in utility costs (construction dust reducing solar system output forcing the purchase of more electricity from JPS).”

Other income of $27.22 million was recorded for the quarter, up from $4.41 million reported for the comparable period in the previous year. CAC noted that, “this was as a result of progress invoicing for the design project being undertaken in Barbuda. CAC has just been awarded another design aspect of the project and expect significant contribution of income in the current financial year and beyond.”

Net finance costs increased by 173% for the period in review to $7.68 million (2018: $2.82 million). The Company highlighted that, “our finance costs also increased as we had budgeted for increased loans to cover short-term working capital needs(particularly covering importation of the outstanding goods in transit.” Interest expenses for the three months ended amounted to $5.20 million relative to $5.64 million twelve months earlier. Interest income and other losses amounted to $73,000 (2018: $266,000) and $2.56 million (2018: gains of $2.56 million), respectively.

CAC mentioned that, “with much of the construction disruption and temporary sales/cash flow issue still affecting our daily processes, the CAC team has decided to turn this major negative into a positive by restructuring, adapting and changing the overall operational approach. As a Company, we have set a goal to win and execute more projects, build on our residential and service sales while driving down inventory and accounts receivables to free up cash.” 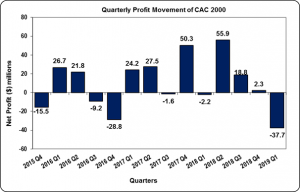