CAC 2000 Limited (CAC) revenues for the first quarter ended January 31, 2021 declined 17% to $253.33 million relative to $306.57 million for the comparable period in 2020. CAC noted, “We partner with our customers to identify solutions such as fresh air injection systems, higher efficiency filtration, sterilization and improved maintenance services, all of which gained us additional revenues.”

The Company reported a 7% reduction in Total Expenses to $96.65 million (2020: $105.78 million). This was as a result of a 32% decline in selling & distribution to $4.74 million (2020: $7.01 million). CAC stated, “Expenses were kept lower than the previous year as we took rapid action to respond to COVID-19 by reducing operating costs, but without making any of our staff members redundant.” Also, general administrative expenses fell by 7% to $91.91 million for the first quarter, relative prior year’s corresponding quarter of $98.77 million.

No Other Income was recorded for the period, relative to the $5,000 reported for the same period the prior year. Consequently, Profit before Taxation and Finance Cost amounted to $16.62 million compared to a profit of $9.03 million experience in the first quarter of 2020.

The company highlighted that, “We have started the new financial year with a healthy job portfolio and are working on some exciting changes, and initiatives as we strategically set upon the path to profitable growth as the leading experts on energy and IEQ all for the purpose of “Improving People’s Lives”. 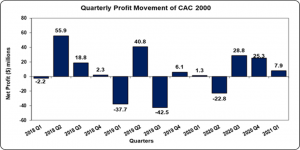