CAC noted, “we introduced a work from home/rostering system and reduced costs as much as possible without having to lay off any employees. We continue to take the opportunity to reexamine our historical business model and improve our operational efficiencies, change our approach and find creative ways to reduce our operational expenses and improve productivity ratios.”

‘Other Income’ of $2.36 million was recorded for the period down from $47.20 million reported for the same period the prior year. ‘Profit before Taxation and Finance Cost’ amounted to $25.81 million, versus a loss of $20.31 million booked in 2019.

CAC stated that, “we have been aggressively working with suppliers and customers to design and rapidly execute IEQ solutions and we are happy to state that we have been making major inroads while helping customers to minimize downtime of their operations (as being announced daily). This impetus is expected to spill over to Q4 and 2021 and we continue to refine our offerings.” 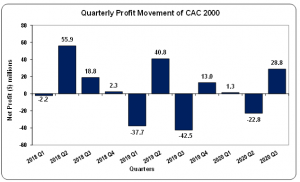 As at July 31, 2020, the Company reported total assets of $1.21 billion, a 9% increase when compared to $1.11 billion a year ago. This was as a result ‘Trade and Other Receivables’ which increased 23% to $643.32 million (2019: $521.72 million). The Company highlighted that, “we continue to work on driving down inventory, but cash inflows are down due to processing delays and hence accounts receivables and borrowings have temporarily trended upwards.”