Carreras Limited (CAR), for the nine months ended December 31, 2017, reported Operating Revenue of $9.53 billion, 9% lower than the $10.48 billion booked in 2016. Revenue for the quarter contracted 16% to close at $3.47 billion versus $4.11 billion booked for the comparable quarter of 2016. According to CAR, “the Company has experienced a decline in its sales volume since the excise lead price increase implemented on March 13, 2017 of $3 per stick of 21.4%. the legal sales volume lost is being channelled directly to the illicit trade which continues to expand as a result of the continuous and excessive excise increase levied on the legal industry over the past 3 years.”

CAR noted, “the Company remains positive in its outlook and has continued to invest mainly in its core brands, Craven “A” and Matterhorn Mojito Vybz, have so far provided innovation and enthusiasm among our consumers, and have resulted in an overall strengthening of our brands.” “The strength of our brands, people and relationships continue to position us for the future.” 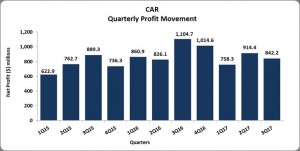