Carreras Limited (CAR) for the six months ended September 30, 2018 reported operating revenue of $6.31 billion, 4% more than the $6.03 billion booked in 2017. Revenue for the quarter however declined by 3% compared to the corresponding quarter in 2017 moving from $3.25 billion in 2017 to $3.16 billion in 2017. Management noted, “the effective management of the cost base and to a lesser extent the recovery in volumes, which were evident in the first quarter, have continued into the second quarter.”

Administrative, distribution and marketing expenses declined 8% to total $906.90 million (2017: $989.68 million). Management indicated, “this 8% decline in overheads versus the similar period last year, is as a result of continued cost management and cost reduction initiatives implemented to achieve significant savings in the short term.”

Additionally, CAR stated, “Our financial results are tempered by the continued presence and growth in the illicit trade in cigarettes which gain momentum after the 21.4% excise increase on March 13, 2017 and result in an erosion of the legal volume base. Additionally, we have noted that sales volumes have been negatively impacted in our entertainment channel as heightened security measures are employed by the Government. For the areas of the island where States of Public Emergency and Zones of Special Operation are in effect, bar, restaurant, cafes and other establishments are mandated to close their businesses at an earlier time. This earlier closure restricts consumption moments.” “Notwithstanding, it is expected that the anticipated volume decline will be somewhat mitigated provided that the Government’s initiatives to reduce crime and their continuation of effort to vigorously pursue measures towards stemming the influx and growth of illicit cigarettes in the market are successful. We reiterate the point that there is a direct relationship between high taxes and its impact on legal volumes, Government’s revenues and the rise of the illicit trade.” 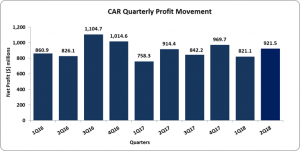