Caribbean Assurance Brokers (CAB) Limited has issued a prospectus for the sale to the public of a 20 per cent shareholding in the company. The raise targeted is $100.2 million.
As indicated by the prospectus, the company is planning a Caribbean expansion.
CAB said it “believes that there are opportunities to expand its brokerage operations throughout the English Speaking Caribbean by setting up offices in Trinidad & Tobago, and establishing strategic alliances in other Caribbean territories.” 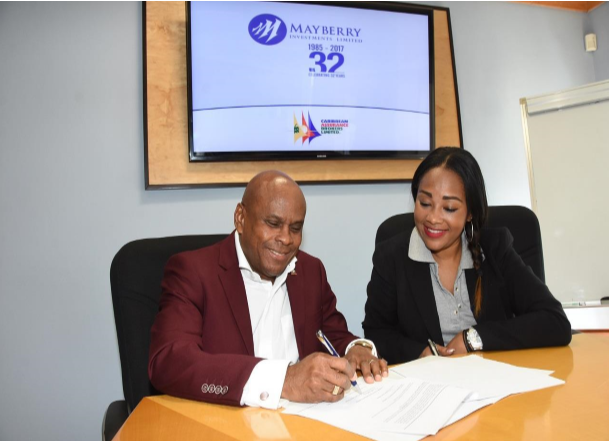 Raymond Walker Chairman & CEO Caribbean Assurance Brokers signs mandate with Tania Waldron Gooden, Senior VP of Investment Banking Mayberry Investments.
Accordingly, it intends to examine these opportunities with a view to growing its customer base and in turn, its revenues.

The prospectus, issued on February 7, 2020, offers for sale 52.5 million ordinary shares at the subscription price of $1.9 each.
The offer includes 44,362,500 shares offered to reserved share applicants and 8,137,500 shares available to the general public.
CAB said it intends to use the net proceeds of the IPO to pay IPO and listing expenses, expand its brokerage operations to other Caribbean territories; expand the company’s solar photovoltaic system, and provide working capital for the company.
The offer will open on February 18 and close on March 3.
The company, led by CEO Raymond Walker will be seeking to list on the Junior Market of the Jamaica Stock Exchange.
Management and directors of the company said by planning the listing, they are eyeing the benefits of the Junior Exchange which include tax benefits for up to ten years, an enhanced public profile, the ability to fund growth through equity capital rather than debt, access to the capital market and the creation of a liquid market for shares, among other benefits.
Walker who currently holds the majority stake in the company is described in the prospectus as a successful life insurance marketing and sales executive, first with Life of Jamaica (now Sagicor Life Jamaica Limited) and then with Blue Cross of Jamaica Limited.
In 2005 he formed Caribbean Assurance Brokers Limited. CAB is licensed by the Financial Services Commission as a local insurance broker.
Additionally, in 2005 the Company received authorisation from the FSC as a facultative placement broker, to place risks under the international health insurance programme (named ICHIP), with specified overseas insurance providers.
For the last 13 years, the company has been distributing ICHIP, with CAB outlining that the product has experienced consistent annual growth from about 84 lives for an annualized premium of approximately US$90,000 in 2006 to over 2,500 lives for annualized premium in excess of US$6,500,000 in 2019.
For the year ending December 31, 2018, the company’s most recent full-year results, the Company had revenues of $385 million.
Walker owned 51 per cent of the company pre-IPO.
The shares being offered in IPO were previously unissued and will dilute his share to 40 per cent.
The company in its prospectus stated that while Walker does not intend to retire soon, they have taken out keyman insurance on his life, considering he is aged over 65 years.
Specifically, it was noted, “the company intends to apply for keyman’s insurance on the life of Mr Walker in the amount of US$1,000,000.00. In the event of Mr Walker’s untimely death the policy proceeds would be payable to the company.”
As outlined by the prospectus, 5.2 million shares have been reserved for Mayberry clients.
Other reserve shares have been set aside for select directors, chosen staff members and a number of longstanding clients.
Reserve shares which are not taken up will revert to public applicants.