Carreras Limited (CAR) For the Financial Year ended March 31, 2017 reported Operating Revenue of $13.51 billion, a 13% increase compared to $11.98 billion recognized in 2016. Cost of Operating Revenue also increased year over year by 12%, amounting to $6.97 billion from $6.24 billion.  Notwithstanding the increase in costs, Gross Operating Profit increased by 14% to total $6.54 billion. Gross profit for the fourth quarter amounted to $1.32 billion compared to $1.49 billion for the comparable period in 2016. 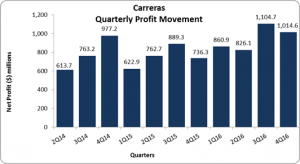