Earnings before interest, tax, depreciation & amortization (EBITDA) amounted to $3.03 billion, an increase of 12% relative to $2.70 billion for the prior year’s corresponding period. For the quarter, CCC reported EBITDA of $598.02 million, $363.72 million more than that reported in 2016 (2016: $234.3 million).  CCC noted, “This performance was driven mainly by lower operating expenses as the restructuring and efficiency improvement programs executed took full effect.”

Total comprehensive income attributable to shareholders for the period amounted to $1.22 billion compared to $1.30 billion for the corresponding period in 2016.

CCC highlighted, “during Q4-2017 the Company incurred significant restructuring costs of $875 million, which will allow for the development of a more competitive and flexible cost structure and increase the profitability of the plant going forward.” They also noted they incurred, “significant increases in energy and fuel related expenses”.

Additionally, CCC noted, “2017 was a transition year for Carib Cement, the most significant achievement being that Health and Safety practices are now the company’s top priority and an integral part of the culture of the Carib Cement family. Our workforce development programs were also a significant feature of 2017, and more than 2,000 hours of training was completed, including cross-training within business units across the CEMEX Group. On the Customer side, focus continued on three priorities: placing our customers’ needs at the center of our work philosophy, making it easier to do business with us, and making customer centricity a discipline. The Net Promoted Score (NPS) indicator system was launched, which will allow us to keep track of customer feedback on our performance and therefore fuel constant improvement in the product offering as well as customer service.” 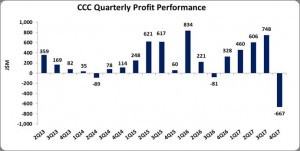