Operating Expenses for the period under review amounted to $1.25 billion relative to $1.16 billion booked for the corresponding period in 2019. Consequently, CCC reported an ‘Operating earnings before other (expenses) income, net’ of $2.87 billion, 4% less than $2.98 billion booked last year same time.

Financial Income amounted to $4.50 million for the period compared to $5.14 million for the corresponding period in 2019. Finance expenses for the period under review closed at $330.48 million relative to $467.26 million incurred for the corresponding period of 2019. Additionally, loss on foreign exchange amounted to $657.90 million, 69% greater than $389.59 million reported for the comparable period in 2019.

Total comprehensive income for the period closed at $988.07 million, relative to $1.50 billion for the corresponding period in 2019.

CCC noted, “Despite the increased operational risks posed by COVID-19, our plant modernisation programme and investment in training continues to yield favourable results in health and safety outcomes. As at the end of this quarter, we have attained 1,832 days without lost time injury at our quarries and 1,008 days at the plant. Embedded within our way of working are sound environmental practices which meet international standards and honour local regulations.” 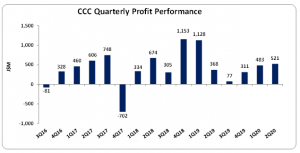