Caribbean Cement Company Limited (CCC) for the Six Months Ended June 30, 2018, reported total revenue amounting to $8.77 billion, up from $8.08 billion reported a year ago. Earnings before interest, tax, depreciation & amortization (EBITDA) amounted to $2.30 billion, an increase of 58% relative to $1.46 billion for the prior year’s corresponding period.

CCC highlighted, “This performance resulted from the positive impact gained from the termination of the lease agreement with Trinidad Cement Limited (TCL) for the Kiln 5 and Mill 5, improvements in sales and marketing efforts amongst other strategic decisions.” 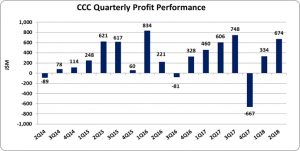 Disclaimer:Analyst Certification -The views expressed in this research report accurately reflect the personal views of Mayberry Investments Limited Research Department about those issuer (s) or securities as at the date of this report. Each research analyst (s) also certify that no part of their compensation was, is, or will be, directly or indirectly, related to the specific recommendation (s) or view (s) expressed by that research analyst in this research report.