Administrative Expenses increased 12% to $19.47 million (2016: $17.33 million), while Selling and Distribution Costs decreased by $3,000 to $986,000 for 2017. CFF stated, “We will continue to with refinement of our strategies and the improvement to our various cost structures in order to drive the desired efficiency whilst improving our cost of sales and gross profit.”

According to the management of CFF, “The company expects that there will be normality to the many issues faced during this quarter and as such expect to report an improvement in these results over the next reporting period as many of these challenges would have been normalized” 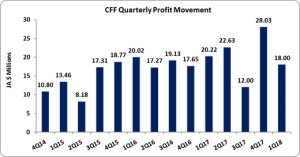