Caribbean Flavours and Fragrances (CFF), for the three months ended March 31, 2022, reported revenues of $174.16 million relative to the $133.74 million booked for the comparable period in 2021. This represented a 30% increase year over year.

Cost of sales amounted to $117.33 million relative to $89.22 million in the prior corresponding period. Despite this increase, gross profit rose 28% to close at $56.83 million for the period under review, compared to the prior year’s figure of $44.52 million.

CFF mentioned, “With the schools reopen along with the entertainment sector, we are looking forward to the possible increase in sales demand for manufacturers which in turn would mean additional business for us. These increased sales figures will more than likely lag behind our reporting timeline when it should become visible to all readers. We will remain mindful of cost increases and look to absorb cost where possible or extract efficiencies in the business. We launched 3 new products last quarter and are introducing them in the second quarter through one of our clients.” 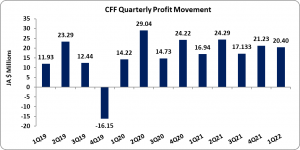