The index for the ‘Food and Non-Alcoholic Beverages’ division recorded a 0.2% decline in its index for May 2018, following a negligible movement for April 2018. This resulted from the movements within the ‘Food’ and ‘Non Alcoholic Beverages’ group. Within the ‘Food’ group, the class ‘Vegetables and Starchy Foods’ fell 1.4%. According to STATIN, this was as a result of the “continued falling prices for items such as carrot, cabbage, lettuce and tomato due to good supply conditions.” Within the ‘Non-Alcoholic Beverages’ group the class ‘Mineral Waters, Soft Drinks, Fruit and Vegetable Juices’ recorded an increase of 0.2% while the ‘Coffee, Tea, and Cocoa’ class increased by 0.1%.

‘Housing, Water, Electricity, Gas and Other Fuels’ division recorded an increase of 0.2% in its index for May 2018. This was a result of the group ‘Electricity, Gas and Other Fuels’ increasing 1.4% following a decline of 4.3% in the month of April 2018. According to STATIN, this movement was “resulted from higher electricity rates”. This was however offset by decreases in the water and sewage rates which resulted in the group ‘Water Supply and Miscellaneous Services Related to the Dwelling’ recording a 4.1 % rise in its index.

The division ‘Health’ and ‘Recreation and Culture’ each grew by 0.4% and 0.5% respectively for May 2018. This movement in the index ‘Health’ was as a result of the 0.6% increase in the group ‘Health Services’ while the movement in the index ‘Recreation and Culture’ was mainly attributable to the “rise in cost for newspapers and cable television services”. 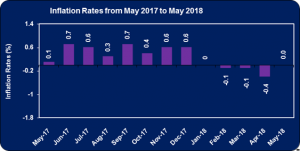