According to the Statistical Institute of Jamaica (STATIN) the consumer price index for October 2021 was 116.0 resulting in an inflation rate of 1.0% when compared to the previous month’s inflation rate of 2.3%. STATIN noted that, “This movement was primarily due to the 2.5% increase in the index for the heavily weighted ‘Food and Non-Alcoholic Beverages’ division. The ‘Vegetables, tubers, plantains, cooking bananas and pulses’ class, had the strongest impact on the movement of the division with a 6.8% rise in its index – owing to higher prices for some agricultural produce, especially vegetables, as a result of the continued low supplies on the market.” However, the overall rate of inflation was moderated by the 0.5% decline in the index for the ‘Housing, Water, Electricity, Gas and Other Fuels’ division. As indicated by STATIN, “this mainly resulted from the group ‘Electricity, Gas and Other Fuels’ recording a decrease of 2.0% in its index due to lower electricity rates. Effective October 2021, the Office of Utilities Regulation (OUR) approved a 1.4% increase in electricity rates to Jamaica Public Service (JPS). However, there was a reduction in customers’ electricity bill due to improvements in the foreign exchange rate and a fall in fuel prices.”

The index for the ‘Food and Non-Alcoholic Beverages’ division rose by 2.5% for October 2021 mainly due to a 2.6% rise in the index for the ‘Food’ group. The increase in the ‘Food’ group was mainly attributed to the upward movement of 6.8% in the index for the class ‘Vegetables, tubers, plantains, cooking bananas and pulses’. This was mainly due to higher prices for vegetables such as cabbage, tomato and sweet pepper as a result of continued low supplies. Additionally, what also contributed to the upward movement within the group was an increase of 4.5 per cent in the index for the class ‘Fruits and nuts’. This was primarily due to higher prices for watermelon, pineapple and papaya. However, the increase in the class was moderated by lower prices for tubers such as yam and Irish potato. Other notable increases were recorded for the following classes: ‘Meat and other parts of slaughtered land animals’ (2.0%) and ‘Cereals and cereal products’ (0.7%). The main contributor for the increase in the ‘Non-Alcoholic Beverages’ group was the class ‘Fruit and vegetable juices’ which went up by 0.8%.

The ‘Housing, Water, Electricity, Gas and Other Fuels’ division had a 0.5% decrease in its index for October 2021 which was influenced by a 2.0% fall in the index for the group ‘Electricity, Gas and Other Fuels’ due to improvements in the foreign exchange rate and a fall in fuel prices which moderated the rate increase granted to the Jamaica Public Service(JPS) by Office of Utilities Regulation(OUR). However, there was a 1.3% increase in the index for the group ‘Water Supply and Miscellaneous Services Relating to the Dwelling’ as result of higher water and sewage rates.

Inflation of 0.6% was recorded for the division ‘Furnishings, Household Equipment and Routine Household Maintenance’. This movement was mainly impacted by the 1.3% increase in the index for the group ‘Household Appliances’. Increases were recorded for all the other groups: ‘Tools and Equipment for House and Garden’ (0.7%), ‘Goods and Services for Routine Household Maintenance’ (0.5%), ‘Furniture, Furnishings and Loose Carpets’ (0.3%) and ‘Household Textiles’ (0.2%).

The division for ‘Health’ recorded an increase of 0.4% in its index for October 2021. This increase was mainly as a result of higher prices for items within the group ‘Medicines and Health Products’, which had a similar increase of 0.4 per cent in its index.

The ‘Recreation, Sport and Culture’ division registered a 0.9% rise for the period under review. Resulting from a 0.5% increase registered for the group, ‘Newspapers, Books and Stationery’. This upward movement resulted from higher prices for some books and stationery. 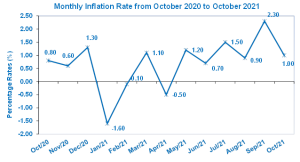