The inflation rate for the month September 2017 was 0.7%, following an upward movement of 0.3% in August 2017. The division which recorded the highest movement for the month was ‘Housing, Water, Electricity, Gas and Other Fuels’ with a 2.6% growth, while the index for ‘Food and Non-Alcoholic Beverages’ advanced by 0.4%. STATIN reported that the increase in ‘Housing, Water, Electricity, Gas and Other Fuels’ was influenced mainly by an increase in electricity rates, while increases within the ‘Food and Non-Alcoholic Beverages’ division was due mainly to a 1.1% upward movement for the group ‘Vegetables and Starchy Foods’. Other notable increases were for the divisions: ‘Restaurants and Accommodation Services’ (1.0%) due to increase in prices for meals consumed away from home and ‘Education’ (2.0%) as a result of higher tuition fees.

For the month of September, the division ‘Housing, Water, Electricity, Gas and Other Fuels’ posted a 2.6% increase. The ‘Electricity, Gas and Other Fuels’ was the main driver behind the growth, this as the group recorded a rose by 4.8%. Also contributing to the upward movement within this division were the groups ’Rentals for Housing’, going up by 0.8% and ’Maintenance and Repair of Dwelling’ up by 0.1%. In contrast the groups ‘Water Supply and Miscellaneous Services Related to the Dwelling’ declined by 0.9%.

The index for the ‘Transport’ division increased by 0.2% for the period under review. This was mainly attributable to a rise in prices for petrol which was tempered by lower costs for air travel. For September 2017, the ‘Communication’ division recorded an increase of 0.2%. This was mainly as a result of an increase in local and international calling rates for residential landline service.

The ‘Health’ division rose by 0.2% in September 2017. This was as a result of a 0.4% increase in the group ‘Medical Products’. Furthermore, the division ‘Restaurants and Accommodation Services’ moved up by 1.0%. An upward movement of 0.2% was recorded in the index for the division ‘Miscellaneous Goods and Services’, while the index for the division ‘Education’, rose by 2.0% for the period under review. The main contributing factor to this increase was the rise in tuition fees at the beginning of the new school year. 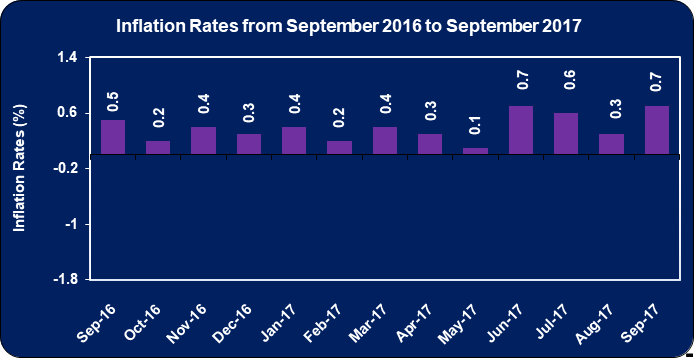