Additionally, Management highlighted that the Company “experienced a critical failure at implementation of new IT system at the start of the FY. This event resulted in significant variable and one-off costs, along with lost bids and annual contract opportunities for servicing its core business, the hotel and food service markets. The impact and recovery extended throughout the first 3 quarters which correlated with the peak tourism season. The logistic challenges created excessive delays and challenges for smooth procurement and delivery capability to fulfil demand.”

Selling and administrative expenses were $22.86 million, a 4% increase on the $21.95 million posted last year.

Depreciation for the year was relatively unchanged when compared to the corresponding prior year to close at $2.47 million (2018: $2.46 million).

CPJ’s also stated, “FY2019 presented the Company with multiple challenges to navigate the disruptive impact to business during its most sensitive earning season. The experience enabled the Company to strengthen a number of critical areas of the business including process reengineering and the introduction of the new technical talent at the senior management and board level.”

CPJ further noted, “the core business model remains resilient and the introduction of new delivery and procurement capabilities creates opportunities for greater efficiency and economies of scale. Also, the introduction of new product categories, combined with the planned incremental growth of hotels on the island over the next 3 years also presents an attractive growth trajectory.”

Furthermore, Management noted that “ the launch of the new Distribution Centre is projected to enable higher operational efficiencies and ultimately support long term value in our ability to fulfill greater demands that will be required to support the growth of the hotel industry. 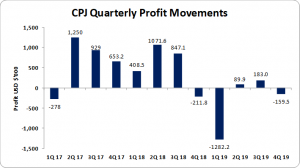