Caribbean Producers Jamaica Limited (CPJ) for the year ended June 30, 2018 reported a 10% growth year on year in gross operating revenues to close at $107.80 million compared to the $98.29 million for the prior year. CPJ noted, “the company recorded significant growth in the following key namely aggressive marketing and pricing strategies, increase in tourist arrivals over the last fiscal year, increased sales in the key frozen and chilled food categories and the introduction of new products in the overall portfolio of offerings.”

For the fourth quarter the company posted a 1% growth in revenues to close at $26.15 million relative to $25.96 million for the same quarter of 2017. Management highlighted , “the strong growth recorded over the first three quarters was followed by a softer than expected fourth quarter. This was directly due to the unforeseen changes arising from the launch and integration of a new IT software platform. The transition of the new IT platform impacted our logistics operations and disrupted our service capacity and consequently our sales from the last two months of the fiscal year.”

Consequently, CPJ recorded an increase in gross profits to $28.43 million (2017: $27.13 million). Gross profits for the quarter however fell from $6.97 million in 2017 to $6.15 million. According to the company, “The Jamaican economy experienced volatility throughout the year with significant fluctuations in the J$:US$ exchange rate. Despite significant month on month fluctuations in the exchange rate, the company effectively aligned its prices to remain competitive and limited the impact on gross profit by only 1%.”

Selling and administrative expenses were $21.95 million, a 10% increase on the $20.04 million posted last year.

CPJ noted, “Operating costs were attributable to the following; increase in distribution and selling costs to meet the increased demand for company products, growth in advertising and marketing for customer awareness and to increase revenue, increase ins alary costs due to redundancies and new hires and increase in shrinkage which directly due to slower rotation resulting from challenges with the IT platform.”

CPJ’s also stated, “It is forecasted that the Jamaican economy will be stable for the upcoming year and inflation is projected to be between 4 and 6 %. The company is in its third year of transformation and continues to strengthen its leadership team with the recent hires at the senior and technical levels. It considers investment in infrastructure and technology to be key enablers for continued growth and efficiency that will aid its transformational journey in the new financial year 2018/2019. Management feels that the growth in its core business is strong and it will continue as a market leader. Increased efficiencies are also anticipated with the commission of a new 56,000 sq. ft state of the art warehouse which is expected to be completed in early 2019.” 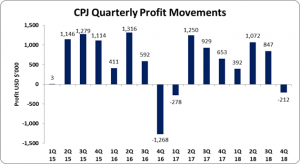