Caribbean Producers Jamaica Limited (CPJ), for the six months ended December 31, 2017, in united states dollars (ecxept where it is indicated otherwise) reported revenues grew 17% from $46.04 million, to close the period at $53.91 million compared to the prior year. For the second quarter, the company posted an 18% growth in revenues to close at $29.54 million relative to $24.99 million for the same quarter of 2016.  CPJ noted that, “the increase was primarily driven by an aggressive growth in sales across all channels with focus on targeted product categories.”

Selling and administrative expenses were $10.46 million, an 11% increase on the $9.45 million posted for the prior year. The company stated that, “salary related expenses, repairs & maintenance” contributed to the increase in expenses.

Profit before finance costs, income and taxation improved 32% to total $2.65 million relative to $2 million in 2016.

CPJ stated, “the company continues to execute its business transformation initiatives to strengthen its platform. The company views investment in technology and talent as vital to the creation of shareholders value as it continues to expand and grow both offshore and onshore. It is expected that the company will continue to benefit from significant improvements in operational excellence and management information capabilities and further growth in the tourism sector in the Caribbean. While management continues to be optimistic and encouraged by preliminary signs of continued growth, the effects, if any of the State of Emergency that was implemented in January 2018 for St. James will continue. ” 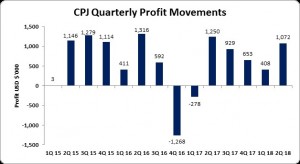