CPJ reports net loss attributable to shareholders of US$1.01 million

Expressed in United States dollars (except where it is indicated otherwise)

Caribbean Producers Jamaica Limited (CPJ) for the nine months ended March 31, 2019 revenues grew marginally by 0.1% from $81.65 million, to close the period at $81.74 million compared to the prior year. For the third quarter, the company posted a 1% growth in revenues to close at $28.01 million relative to $27.74 million for the same quarter of 2018.  CPJ noted that, “the growth in the revenues and the return to profitability in Q3, has resulted in an improved performance over the two periods. This is a strong indicator that the company is recovering from business disruption it experienced from the failed IT project in the first half of the current fiscal year.” The Company also noted it witnessed “strong demand for its diversified portfolio of products in this quarter, and hence its Spirits sales grew by 28%, Seafood sales by 11%, Dairy by 6%, Frozen grocery by 8%, Juices by 12% and RTD beverages by 8% when compared to the nine-month period last year.”

Other operating income totaled $172,883; this compares with an operating income of $72,894 booked in 2018. The Company also booked ‘Intangible asset written-off of $610,008 for the period relative to nil the prior year.

CPJ stated, “The Group reflected a nine-month net loss of US$0.98 M. The loss was mainly due to the following: Impairment of an intangible IT software of US$0.61M as a result of the failed implantation of a new Warehouse Management System and Correlated impact on Supply chain and Logistics expenses” 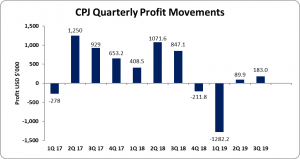