In United States dollars (except where it is indicated otherwise)

Caribbean Producers Jamaica Limited (CPJ) for the nine months ended March 31, 2021 reported revenue decline of 57% from $85.92 million in 2020, to close the period at $37.11 million. For the third quarter, the Company posted a 52% decline in revenues to close at $12.72 million relative to $26.46 million for the same quarter of 2020. CPJ noted that, “the company has started to see some normalcy return to its business since March 2021 and is hopeful that this marks a pivotal turn in the pandemic due to increased vaccinations. The Group observed growth in revenue in both onshore and offshore operations.”

Loss before finance costs, income and taxation totaled $2.48 million relative to profit of $1.93 million in 2020. 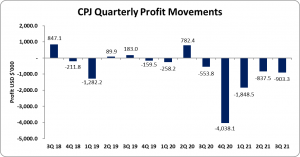