Revenue for the period increased by 9% to $20.03 billion relative to $18.34 billion last year. Revenue for the quarter totalled $6.83 billion a 13% increase year over year (2016: $6.04 billion). “This improvement was driven chiefly by our customers demand for continuous connectivity, mobility, data security and transmission, in addition to our disciplined approach to managing costs.”

Operating costs before depreciation and amortization increased by 5% to $13.10 billion. The Company reports that it was “due to a 5% increase in outpayments and direct costs, primarily a result of an increase in interconnect costs associated, in part, with an increase in mobile and international fixed line activity; and a 4% net increase in employee, administration, marketing and selling expenses driven by higher management and royalty fees.”

Depreciation reduced by 16% to $2.19 billion compared to $2.59 billion in the prior year to date. Amortization increased by 29% to $1.12 billion, up $256 million. For the period, Impairment, Restructuring and Other Operating items, net amounted to loss of $26 million relative to a gain of $1.97 billion reported in 2016. 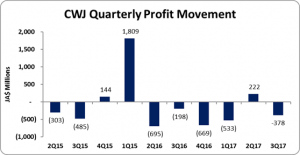