For the first quarter ended March 31, 2017, Cable & Wireless Jamaica Limited (CWJ) reported revenue for increased by 10% to $6.38 billion relative to $5.81 billion in 2016. The CEO, Garfield Sinclair, attributed the increase to, “a 17% increase in Mobile revenues.” Additionally, he states that “This growth in our mobile business both in revenue and revenue share reflects the continuing customer migration from fixed to voice and data services.” Their highly successful broadband expansion program that will see additional communities or approximately 60,000 homes benefitting from access to high speed internet that will ultimately improve subscriptions. Mr Sinclair also stated “C&W Business segment had a flat revenue performance was impacted by a slower order period right after the Christmas holiday break”.

Operating costs before depreciation and amortization increased in 2017 by 36% to $4.50 billion up from $3.31 billion in 2016. According to CWJ, “this was due to a 46% increase in out payments and direct costs and a 30% net increase in employee, administration, marketing and selling expenses, driven by higher management fee and royalty fees.”

Depreciation of for the quarter amounted to $730 million compared to $1.25 billion a year ago. Amortization year over year decreased 20% from $333 million to $265 million.

Loss before taxation for the first quarter amounted to $421 million relative to a profit of $1.82 billion for the corresponding period in 2017.

Please note that the CWJ board changed the company’s accounting terminal date from March 31st to December 31st so that CWJ’s financial year-end would be conterminous with that of Liberty Global, to achieve uniformity throughout the group. 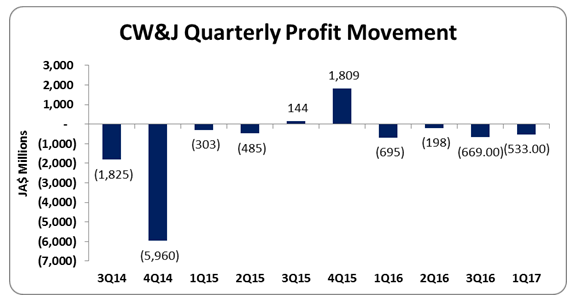