Dolphin Cove Limited (DCOVE), for the six months ended June 30, 2019 reported total revenue of US$7.85 million, a 2% increase when compared to US$7.73 million booked the year prior. Revenue from dolphin attraction contributed US$4.36 million to total revenue, a 3% improvement when compared to the US$4.24 million reported in 2018, while revenues from the ancillary services totalled US$3.48 million, a marginal decrease from last year’s US$3.49 million. Total revenue for the quarter amounted to US$3.95 million (2018: US$3.87 million), with Dolphin Attraction and Ancillary Service contributing US$2.16 million (2018: US$1.94 million) and US$1.79 million (2018: US$1.94 million) respectively. DCOVE noted, “Despite the decrease in sales from Cruise Ships, all the other distribution channels showed a good performance allowing us to achieve 1% increase in our revenue compared to Q2 2018.”

Direct costs of sales for the period totalled US$813,929, 24% more than the US$655,906 reported in 2018. As such, net revenue for the six months amounted to US$7.03 million (2018: US$7.07 million). DCOVE for the second quarter booked net revenue of US$3.60 million (2018:$3.51 million). DCOVE stated, “Our direct costs increased during the first half of the year due mainly to the addition of 4 dolphin as well as the direct costs related to the new facilities at Puerto Seco Beach Club which contributed to the increase in expenses, however, the main drivers for the increase in our expenditure were:

Salaries and Benefits – In 2018 due to the enhanced security measures implemented by the government, we decided to put on hold the hiring of some positions.  When we considered that this situation stabilized at the end of 2018, we hired the additional staff to provide a better experience to our guests.

Selling and Marketing – The commercial areas have had a very active six months with increased promotion and advertising as a result of which we achieved an increase in the attendance by 8.2% compared to 2018.”

DCOVE highlighted, “Working Capital increased by 29% as a result of the renovation works and improvements to the physical assets, the reduction of the current portion of long-term debt and the increase in the accounts receivable driven by the business produced by the Tour Operators which have longer credit terms than the Cruise Lines.” 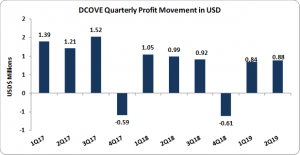