Dolphin Cove Limited (DCOVE), for the six months ended June 30, 2018 reported total revenue of US$7.73 million, a 11% decrease when compared to US$8.66 million booked the year prior. Revenue from dolphin attraction contributed US$4.24 million to total revenue, a 14% decline when compared to the US$4.91 million reported in 2017, while revenues from the ancillary services totalled US$3.49 million, down 7% from last year’s US$3.75 million. Total revenue for the quarter amounted to US$3.87 million (2017: US$4.37 million), with Dolphin Attraction and Ancillary Service contributing US$1.94 million (2017: US$2.49 million) and US$1.94 million (2017: US$1.88 million) respectively. DCOVE noted, “revenues decreased due mainly to the adverse effect of the implementation of the State of Emergency that we experienced in the first four months of the year.”

DCOVE indicated, “The improvements to our facilities have strengthened relationships with our commercial partners as has the outstanding service provided by our staff and this has mitigated the adverse effect of the State of Emergency.”

DCOVE highlighted, “Working Capital declined as a result of the reduction of long term liabilities and improvements and additions to fixed assets. The increase in amounts due from related parties included in current assets is due to the increase in credit terms of our E-commerce entities as well as the “shelter fee” being charged to our sister company World of Dolphins Inc. for the Dolphins brought to Jamaica after the hurricanes that hit the BVI Islands last year, we expect an improvement in the collections from related parties during the Q3 based on the new agreement signed this year. Our overseas and local projects are still in the planning stages and are being refined to optimize the cost and benefits of the investments and we anticipate being able to provide a more definitive report on this matter in the third quarter of 2018.” 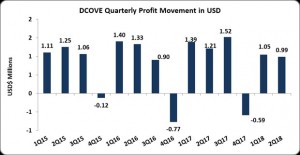