Derrimon Trading Limited (DTL), for nine months ended September 30, 2022, reported trading income of $13.8 billion compared to the $12.20 billion booked for the prior year’s comparable period. The company reported revenues of $4.94 billion for the quarter (2021: $4.14 billion). DTL indicated, “The improved performance being reported is the result of our growth strategy being achieved throughout our companies and business segments. Caribbean Flavours and Fragrances Limited (CFF) achieved one of its highest ever quarterly revenue performance to date while Woodcats International Limited has surpassed its budget and the 2021 financial year performance. Arosa and Spicy Hill contributed moderately to the quarterly outrun with both Marnock businesses in New York improving in the third quarter after a slow start to the first half of the year.”

Other income for the period under review fell 9% to $70.82 million relative to $77.47 million booked in the prior comparable period.

Total operating expenses totaled $2.30 billion for the period under review, representing a growth of 21% on the $1.89 billion recorded in the prior year’s corresponding period. Of this, administrative expenses amounted to $1.90 billion, 20% higher when compared to the $1.58 billion in 2021. Selling and distribution expenses recorded a 27% increase for the period, totaling $398.04 million (2021: $312.43 million). Total expenses for the quarter posted a 29% increase to $872.73 million in 2022 from $677.54 million for the three months ended September 30, 2021. The company noted, “The increased expenses reflect the inflationary environment and rising cost of expenses such as staff costs , other business operating costs such as marketing and brand development and higher utility costs. This period also reflect the full consolidation of our latest acquisitions which were not accounted for in the prior period.”

For the nine month period, finance cost closed at $266.92 million versus the $80.52 million posted in the 2021, a 231% increase year over year. According to DTL this was as a result of, “the Group borrowed additional capital to fund the $932 million acquisition of Arosa, complete the new flagship Select Grocers Store, and to extend the Delect Brand. Additionally, the recognition of IFRS 16 on a quarterly basis is factored. There was further increased capital expenditure in relation to Spicy Hill and Arosa which required additional funding to align them with the group structure and expand their business lines.” 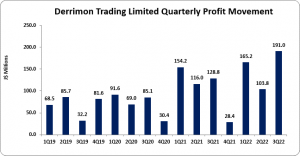