Derrimon Trading Limited (DTL), for six months ended June 30, 2022, reported trading income of $8.86 billion compared to the $8.05 billion booked for the prior year’s comparable period. DTL indicated, “The improved performance reported is a result of our growth strategy being achieved through our companies and business segments. The period saw a full quarter of consolidation for Spicy Hill Farms Limited and Arosa Limited which were acquired at the start of the second quarter. Caribbean Flavours and Fragrances Limited (CFF) and Woodcats International Limited maintained adequate sales despite the continued negative impact from the elevated inflation, raw material shortages and delays from our overseas supplies.”

Other income for the period under review rose 517% to $260.62 million relative to $42.25 million booked in the prior comparable period. DTL noted, “Gains and losses on disposal of property, plant and equipment are determined by comparing the proceeds with the carrying amount and are recognized in other income in the statement of other comprehensive income.”

For the six months period, finance cost closed at $175.02 million versus the $46.41 million posted in the 2021, a 277% increase year over year. According to DTL this was as a result of, “the Group borrowing additional capital to fund the $932 million acquisition of Arosa . Also impacting the result is the recognition of IFRS 16 on a monthly basis, this represents a change in our accounting policy. This was compounded by the appreciation of the Jamaican Dollar against the United States Dollar which resulted in foreign exchange losses for the period.”

DTL noted, “Notable events during the period included the temporary disruption to our Marnock Retail LLC subsidiary which underwent a store reset. This was also compounded by supply chain disruptions and inflation during the period. Spicy Hill’s factory was relocated from its Trelawny location to Marcus Garvey Drive and underwent factory upgrade and modernisation in the process. Our retail business profitability improved significantly when compared to the prior period and was positively influenced by our constant focus on the optimization of the portfolio as well as our aim of making the business efficient.” 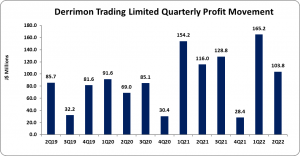