Express Catering Limited (ECL) for the nine months ended February 28, 2018 reported a 12% increase in revenue to US$11.30 million (2017: US$10.02 million). Revenue for the quarter advanced 10% to close at US$4.39 million relative to US$4.00 million reported the previous year. Notably, the company stated, “Q3 is traditionally the second best earning Quarter for the fiscal year.”

Total expenses decreased by 13% for the period in review to US$5.48 million for 2017, down from US$6.28 million booked for the nine months ended February 2017. The decrease was associated with a 13% decline in administrative expenses to US$5.05 million from US$5.83 million. Depreciation and Amortization saw a 4% decline to US$400,475 compared to US$418,968 for the comparable period in 2017. Promotional expenses saw a 4% increase from US$29,337 to US$30,380. Management noted, “Operating costs including rent, salaries and wages and utilities all increased to support the increase in revenue. However, combined expenditure decreased as a result of savings associated with the removal of Group related charges.” Total expenses for the quarter declined 14% to close at US$2.00 million (2017: $2.32 million). The company also noted, “The Starbucks locations will be fully rolled out in the fourth quarter so additional expenditure will be incurred.

The company, as at February 28, 2018, recorded total assets of US$10.68 million. Notably, property, plant and equipment as at February 28, 2018 amounted to 4.40 million, while ‘Owing by related companies’ totalled US$5.12 million. The company noted, “Fixed Assets expenditure for the nine months to date was US$ 303,103. This was spent primarily for the continuing work on the new Starbucks locations as well as replacement cost for fully depreciated and worn fixtures and equipment.” 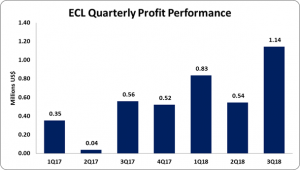