Everything Fresh Limited (EFRESH), for the nine months ended September 30, 2019, Revenue grew by 18% amounting to $1.64 billion, up from $1.39 billion reported a year ago. The third quarter reported revenues of $525.17 million, a 24% increase when compared to the $421.96 million for the corresponding period last year.

The Company noted, “the amounts shown in comprehensive Income for 2019 include results from the Meats Processing division which began operations on 1 January 2019 and therefore the comparative amounts from 2018 relate only to the traditional Distribution division.” 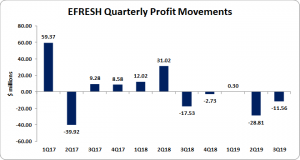