Everything Fresh (EFRESH) for the six months ended June 30, 2020 reported total revenues of $573.21 million, a 49% decrease from the $1.11 billion reported for the prior period in 2019. For the quarter, revenue totalled $83.96 million, 84% less than the $520.54 million reported for 2019’s quarter. EFRESH stated, “The Covid-19 pandemic started to impact our sales in middle of March 2020, when our hotel customers began to close their properties. Most of these properties remained closed throughout our second quarter which ended 30 June 2020. Although Jamaica lifted travel restriction on June 15, we did not have any significant sales to hotels until July, after the second quarter ended.”

In addition, EFRESH stated that the sales for the second quarter of the current year were significantly down when compare to the comparative period last year because, “the reduction in sales being primarily due to the effects of the Covid-19 pandemic, as well as, the company’s decision at the end of 2019 to discontinue supplying special pork cuts. We have continued with production of pork sausages and beef burgers.”

Cost of Sales for the period decreased 47% to $516.43 million relative to the $982.80 million booked the corresponding period in 2019. As such, gross profit for the period amounted to $56.77 million, a 57% decline from the $130.93 million reported in 2019. Gross loss for the quarter amounted to $5.85 million, relative to a profit of $52.26 million booked in prior quarter. Management noted, “We reduced our overheads, mainly due to the scaling back of operations at the Meat Plant. In addition to this, the hours worked by our team for the second quarter of 2020 were substantially reduced as a result of the decreased sales activity. Significantly, the company did not lay off any of our team members during this time.”

EFRESH noted, “Our company is currently ramping up sales in the retail sector. Sales to supermarkets and restaurants are currently trending upward compared to historical sales for these sectors.” 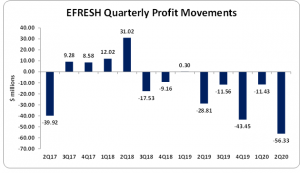