Everything Fresh Limited (EFRESH), for the nine months ended September 30, 2020, Revenue fell by 46% amounting to $881.11 million, down from $1.64 billion reported a year ago. The third quarter reported revenues of $307.91 million, a 41% decrease when compared to the $525.17 million for the corresponding period last year. EFRESH stated, “On July 1, 2020, our Company acquired 60% of the shares of Everything Fresh Bahamas Limited, a company registered in the Bahamas. Everything Fresh Bahamas services the same industries as the Jamaican company, namely tourism, restaurants and retail. The Covid 19 pandemic has severely impacted the results of both companies. The Bahamas is currently in its second lock-down with very few hotel rooms in operation. The Bahamian company is currently doing very well in selling to the local trade and once the hotels reopen, is poised for significant growth.”

The Company noted, “Both companies continue to remain liquid due to tight management of working capital.” Additionally, “The foundation has been laid to minimise the losses and begin the turnaround as the Caribbean hotel sector continues to show signs of increased activity despite the on-going pandemic.” 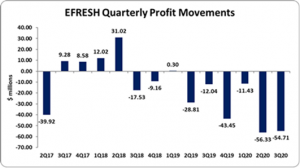