Cost of sales closed the period at $1.95 billion (2018: $1.66 billion) which translated into a gross profit of $256.35 million (2018: $218.71 million). For the fourth quarter, gross profit increased 4% to $52.25 million relative to $50.24 million in 2018. The Company noted, “The pressure on margins in the traditional Distribution Division in the last quarter is a result of having fixed contract pricing with customers through the end of 2019. As a result, rising costs associated with stock arriving in the last quarter had a downward impact on margins.”

Tax credit of $20.15 million was reported for year-end relative to $2.42 million reported the previous year. As such, net loss of $83.52 million was booked for the period relative to net profit $16.34 million for the corresponding period in 2018. The company stated, “This is mainly a result of the underutilization of the Meat Processing Plant as gross margins were below the breakeven point. In addition to this, the price that the market demanded for pork products in particular, made it difficult to earn sufficient margins to turn a profit.” For the quarter, a net loss of $43.45 million was booked compared to a net loss of $9.16 million in the previous corresponding quarter. 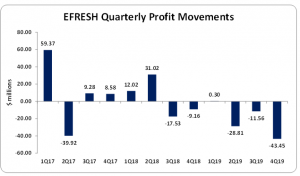