Consequently, Net Profit for the year totalled $44.91 million relative to $44.21 million recorded the prior financial year. Net profit for the quarter amounted to $26.28 million, a 134% increase compared to $11.24 million booked for the final quarter of 2017. 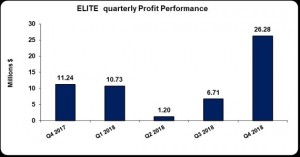