Elite Diagnostics Limited (ELITE), for the three months ended September 30, 2020 reported that revenue decreased by 7% to total $109.72 million compared to $118 million for the same period in 2019. The company highlighted, “the company’s 1st quarter revenue was affected by Covid-19 with reduction of operating hours and reduced procedures. Currently the company’s operational hours are back to normal. An unusually lengthy breakdown of the CT also impacted our revenues during the 1st quarter. Along with our regular Preventative Maintenance of the machines, the company has invested in equipment and parts to reduce some of the downtime of the machine breakdowns.”

ELITE added, “the St Ann location revenue is increasing month over month since all modalities became operational in the 1st quarter 2020. The company is cautiously optimistic as the effects of Covid19 more negatively impacts the rural areas of the country.”

Loss before tax totalled $10.34 million compared to a profit of $16.69 million recorded last year. No taxes were booked for the period.

Therefore, net loss for the period totalled $10.24 million, versus a profit of $16.69 million the prior financial year.

The company noted, “The company continues to see steady demand for imaging services at all locations. The negative effects of Covid-19 and equipment downtime remains a challenge, however the company is hopeful to see enhanced performance due to growth of the St Ann location and longer operating hours.” 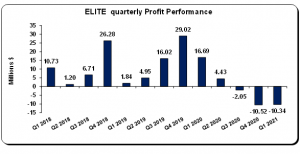