Elite noted, “We continue to record increased revenues in most areas which had significantly declined during the height of the Covid-19 pandemic, however unforeseen machine downtime during the period under review has negatively impacted our budgetary projections.   An estimated shortfall of $25M in gross revenues was experienced due to extensive downtime which overlapped the months of August and September.”

Profit before tax totalled $5.81 million compared to a loss of $514,678 million recorded last year. No taxes were booked for the period.

Therefore, net profit for the period totalled $5.81 million versus a profit of $514,678 the prior financial year.

ELITE noted, “during the quarter, the government instituted its most aggressive shutdown and curfew to curtail the effects of Covid-19. Although the company experienced it best ever quarterly revenue, expenses continues to increase. The overall equipment repair expenses have been reduced since solving the challenges at the St Ann location. The remaining expenses of those equipment repairs were billed in this 1st quarter.”

Furthermore, “the St Ann location continues its steady revenue growth and with the addition of the new MRI in Kingston, the company is optimistic. The installation of the new MRI system is still on schedule to be operational early 2022.

As at September 30, 2022, total assets amounted to $1.02 billion, compared to $672.35 million for last year. This increase in total assets was mainly as a result of an increase in ‘Property, plant and equipment’ from $559.32 million in 2021 to $756.32 million as at September 2022.  Management noted, “The acquisition of the Siemens MRI in 2021 has resulted in the significant variance reflected in the total assets figures reported between the comparative periods.” 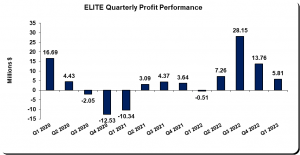