Finance cost for the nine months totalled $15.73 million, a slight 1% increase when compared to the $15.62 million recorded for the same period last year, while exchange loss amounted to $5.13 million compared to a loss of $1.69 million the prior year.

Net loss for the period totalled $2.89 million relative to a net profit of $19.07 million recorded the prior financial year’s corresponding period. Net profit for the quarter amounted to $4.37 million, compared to a net loss of $2.05 million booked for the same quarter in prior year.

ELITE noted, “Covid-19 continues to negatively impact our revenues with shorter operational hours and reduced Interventional Procedures. Demand for imaging services continues to remain robust. Challenges still persisted at our Drax Hall location with our two main revenue drivers, MRI and CT. The company enlisted overseas expertise and currently, all modalities are operational at the Drax Hall location. The company feels it has moved past the year long challenges of the MRI and CT. Ultrasounds, X-ray and the Doctor Offices at the Drax Hall location are growing steadily.” 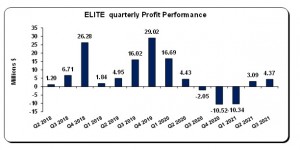