Interest expenses for the period amounted to $285.62 million, a 38% increase when compared to $207.68 million recorded for the prior year.

Administrative expenses rose 11% for the year to close at $211.69 million up from $190.16 million recorded in the previous year.

Eppley recorded a total of $21.58 million for share of net profit from joint venture accounted for using the equity method for the period relative to the $10.82 million recorded for the corresponding period in FY2020.

Net impairment losses of financial and contracts assets totalled $1.47 million versus $939,000 documented in the prior comparable year.

Eppley noted, “Our growth in profitability continues to be led by the fees we earn managing or administering assets in our real estate, mezzanine and infrastructure strategies. These fees provide a source of recurring predictable cash flow. Our proprietary portfolio is our second source of earnings. We are starting to see a recovery in the growth of the gross income we earn from our own investments. We expect that this will translate into increases in our income net of financing costs in the short-term.” 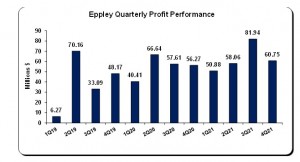