The Company highlighted, “At the end of the first half we owned a $5.0 billion investment portfolio consisting of cash, loans, leases, receivables and investments in our mezzanine, real estate, infrastructure and asset management joint ventures and subsidiaries. The average income yield of our portfolio was 13% and 17% excluding our large cash balances.”

In addition, Eppley further stated, “Eppley’s business model, culture and investment philosophy are designed to thrive in the current market environment. We are increasingly seeing opportunities to deploy capital at favourable risk-adjusted returns and expect this to continue in the second half of 2021.” 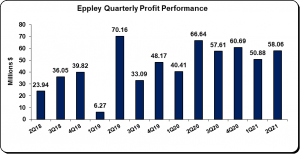