Interest expenses for the period amounted to $54.05 million, an 8% increase when compared to $50.03 million recorded in the prior year.

Consequently, net interest income for the quarter fell 58% to total $17.34 million down from the $41.26 million recorded in the corresponding period of 2020. EPLY noted, “Interest income was down sharply on account of both lower loan volumes and lower weighted average interest rates. We also experienced an FX loss in the quarter. These negative factors were more than compensated for by the continued strong performance of our asset management business.”

Other operating income for the period under review amounted to $10.82 million versus $7.28 million reported in 2020.

Total comprehensive income for the three months ended March 2021 close​d at $50.92 million, a 60% increase when compared to $31.77 million booked the corresponding period.

EPLY noted, “Eppley remains well capitalized with ample “dry powder” on its balance sheet and in its funds. Our business model, culture and investment philosophy are designed to thrive in current market environment.”

Furthermore, “As we look ahead, we are cautiously optimistic about the opportunities we see to put significant capital to work on behalf of our investors and shareholders in 2021.” 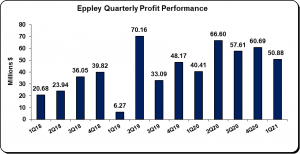