Eppley Limited (EPLY), for the first three months ended March 31, 2018 reported interest income of $73.71 million an increase of 18% when compared to the $62.54 million recorded the previous year.

EPLY noted, “at the end of the quarter we owned a $2.6 billion investment portfolio consisting mainly of loans, leases and receivables. The average income yield of our portfolio was 14%. Our capital at risk was less than 1% of capital.” 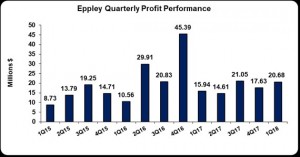