Interest expenses for the period amounted to $197 million, a 16% increase when compared to $170.15 million recorded for the prior year.

Administrative expenses rose 27% for the year to close at $174.53 million up from $137.94 million recorded in the previous year.

Eppley recorded a total of $10.55 million for share of net profit from joint venture accounted for using the equity method for the period relative to the $17.16 million recorded for the corresponding period in FY2018.

There was no net impairment losses of financial and contracts assets reported versus $922,000 documented in the prior comparable year.

The company highlighted that, “the net interest income on our proprietary investments and the management fees from our funds both increased significantly so far this year highlighting the continued improvement in the quality of our underlying business.”

In addition, Eppley noted that, “At the end of the quarter we owned a $3.8 billion investment portfolio consisting of loans, leases, receivables and investments in our real estate and asset management joint ventures and subsidiaries. The average income yield of our portfolio was 13%. Our capital-at-risk was less than 1% of capital. We also managed the equivalent of US$70 million of committed capital for investors through the Caribbean Mezzanine Fund and the Eppley Caribbean Property Fund.” 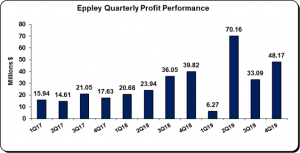