Interest expenses for the period amounted to $50.03 million, a 10% increase when compared to $4​5.30 million recorded in the prior year.

Consequently, net interest income for the quarter fell 11% to total $41.26 million down from the $46.53 million recorded in the corresponding period of 2019.

Other operating income for the period under review amounted to $ 41.50 million versus other operating losses of  $2.24 million reported in 2019.

Administrative expenses rose 10% for the quarter to close at $41.21 million up from $37.47 million recorded for the first quarter of 2019. Also, ‘Net impairment of financial and contract assets’ amounted to $67,000 for the period under review relative to nil for the same period in 2019.

As such, pre-tax profit closed at $41.48 million for the first three months of 2020, 350% greater than the $9.21 million booked in 2019. Taxation at the end of March 2020 amounted to $1.07 million (2019: $2.95 million), resulting in a net profit attributable to shareholders of $40.41 million, an increase of $34.15 million from the $6.27 million recorded for the same quarter in 2019. The company stated, “growth was driven primarily by the expansion of our asset management business underscoring the continued improvement in the quality of Eppley’s earnings.”

EPLY noted, “At the end of the quarter we owned a $3.9 billion investment portfolio consisting of loans, leases, receivables and investments in our mezzanine, real estate, infrastructure and asset management joint ventures, and subsidiaries. The average income yield of our portfolio was 12%.”

Furthermore, “Today the Board of Directors approved a dividend of 3.72 cents per share payable on June 12 to ordinary shareholders on record as of May 29.” 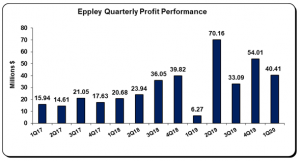