Interest expenses for the period amounted to $170.15 million, a 7% increase when compared to $158.39 million recorded for the prior year.

Administrative expenses rose 57% for the year to close at $137.94 million up from $87.90 million recorded the previous year.

Eppley recorded a total of $17.16 million for share of net profit from joint venture accounted for using the equity method for the period relative to the $16.13 million recorded for the corresponding period in FY2017.

Net impairment losses of financial and contracts assets amounted to 922,000 in 2018 versus nil in the prior year. 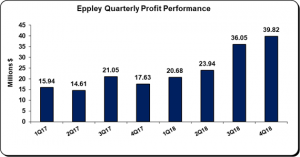